Technician, Vocals of the Data Crew

Love The Pickle (The Data Crew)

Paul J. Peterson is a stubborn, strict, brave, strong and smart leader of The Data Crew. Really good at videos, games, and stuff like that. He first met Alexander since 2006 and they've been friends for 13 years. Ever since Takahashi left, he has offered the right to him of being the king of TDC on 2007. Worst of all, he has to deal with Noob and whenever it's bad things, he can be overwhelmed and infuriated.

"I'm going to give you a McAssKicking if you don't shut your fucking face!"

Favorite Holiday: All of them!

Favorite Season: All of them!

Voiced By: The Official Comix Minis 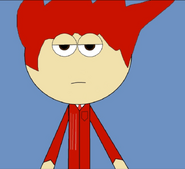 Paul and Alexander Become Best Friends on November 2006
Add a photo to this gallery
Retrieved from "https://official-comix-shorts.fandom.com/wiki/Paul?oldid=2901"
Community content is available under CC-BY-SA unless otherwise noted.