Hava S. Miller is an Icelandic exorcist who tries and keeps the demons away from possessed people. She is a huge fan of rock music in different genres. For example, blues rock, psychedelic music, death and heavy metal, Grindcore, etc. After Grayson's loving and bonding with her, They both decided to get married on March 2020 and Hava moves in to Tokyo with Grayson and with The Data Crew.

"Is every Peterson boy a pussy?" 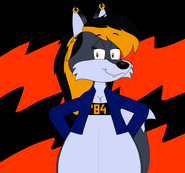 Her TRF Form.
Community content is available under CC-BY-SA unless otherwise noted.
Advertisement